Here at the SnS headquarters, we’ve been caught up in a dance fever of sorts with the latest single from Maggie Rogers’ “Want Want” stuck on loop.  Check out the new song and find out more about Maggie Rogers below

Singer/songwriter Maggie Rogers combines folk, dance, and R&B into an emotional yet crowd-pleasing sound. After self-releasing two albums of introspective acoustic songs and falling in love with dance music while in college, her first major success came with 2016’s viral hit “Alaska.” On later releases like her 2019 debut album, Heard It in a Past Life, she gave her music a pop polish while remaining true to her roots.

Growing up in Easton, Maryland, Rogers began playing harp at age seven and loved the music of Gustav Holst and Vivaldi. Meanwhile, her mom played her neo-soul divas like Erykah Badu and Lauryn Hill; by the time she was in middle school, she’d added piano, guitar, and songwriting to her repertoire. While studying at St. Andrews School in Delaware, she fell in love with the banjo and folk music, and attended a Berklee College of Music program during the summer after her junior year. Rogers won the program’s songwriting contest, which spurred her to focus on writing as high school came to a close. During her senior year, she turned a broom closet into a makeshift studio and recorded what became her first album, 2012’s The Echo; Rogers included her demos as part of her application to New York University’s Clive Davis Institute of Recorded Music. During her freshman year, she transcribed and edited the interviews that became the 2017 book Meet Me in the Bathroom while she was an intern for music journalist Lizzy Goodman. She released another folky album, 2014’s Blood Ballet, while she was a sophomore.

Over the next few years, Rogers’ sound evolved, thanks in part to her time in New York City and her discovery of electronic music while studying abroad in France. She united the different strands of her music to major success in 2016 with “Alaska,” a song she wrote in 15 minutes about a hiking trip for a master class with Pharrell Williams. A video of a visibly moved Williams listening to the song went viral that June, resulting in millions of views as well as hundreds of thousands of plays of The Echo and Blood Ballet. Later that month, she released the finished version of “Alaska,” which reached number 18 on Billboard’s Hot Rock Songs chart. 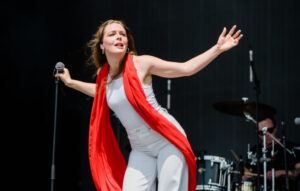 Rogers signed a deal with Capitol Records that allowed her to retain ownership of her masters and created her own Debay Sounds imprint, on which the Now That the Light Is Fading EP appeared in February 2017. A single from the EP, “On + Off,” peaked at number 44 on the Hot Rock Songs chart that month. In September 2017, Rogers issued the single “Split Stones,” a favorite in her live shows, before concentrating on making her debut album. Featuring production by Greg Kurstin, Rostam, and Ricky Reed, Heard It in a Past Life arrived in January 2019; that month, the single “Light On” hit number one on Billboard’s Adult Alternative Songs chart, and helped earn Rogers a nomination for Best New Artist at the 2020 Grammy Awards. Later in 2020, she delivered a virtual performance at that year’s Democratic National Convention and recorded a cover of the Goo Goo Dolls‘ “Iris” with Phoebe Bridgers that benefitted the voting rights organization Fair Fight Action. That December, Rogers released Notes from the Archive: Recordings 2011 – 2016, a collection of early recordings that touched on the Echo and Blood Ballet days and included several previously unreleased songs.