Eva from Eva Under Fire has a new song out called “Blow” and we gave her a chance to Blow off some steam in the Skratch n’ Sniff Rant Room. Here’s a hint guys, stay the F out of her way cause she’s got shit to do! See and hear more with Eva Under Fire, below!

If you think rock n’ roll fairy tales are a thing of the past, you haven’t met Eva Under Fire. These Detroit rock upstarts got their start five years ago and instantly began cutting their teeth in the underground rock scene, building an enthusiastic fanbase the old-fashioned way. However, the band’s trajectory shifted toward the stratosphere when they sent an unsolicited demo to Better Noise Music, who recognized the band’s hybrid of rock, metal, pop, and classic rock as something wholly unique.

Inspired by everyone from the Deftones to Journey, Love, Drugs & Misery combines soaring melodies and relentless riffing with the powerful pipes of vocalist Eva Marie, who passionately spreads the band’s inclusive message of hope during these uncertain times. That said, it took a lot of hard work for them to get to this point. The group’s roots go back to 2015 when Eva, guitarists Chris Slapnik and Rob Lyberg, bassist Ed Joseph and drummer Corey Newsom, decided to get together and write music that represented their diverse set of influences. The chemistry clicked and after releasing a well-received full-length and two EPs, the band signed to Better Noise and spent the past two years working on Love, Drugs & Misery, their most ambitious and fully realized release to date. 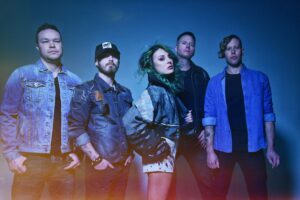 “We really wanted to challenge ourselves with this record and focus on melodies and writing the best material that we could come up with,” Eva explains. “We really came up with the best of the best when it came to our songwriting. Some songs are fun, others are more emotional.” For Love, Drugs & Misery, the band once again teamed up with local collaborators BJ Perry (I Prevail, Escape The Fate) and John Pregler, whose collective attention to detail helped the band fine-tune their sound. BJ and John made sure everything was really focused and the best it could be, especially the melodies,” Eva explains. That laser focus allowed the band to create an album that is as creative as it is authentic. “My biggest influence is probably Deftones because they have such an innovative mix of sounds,” Chris explains, “and Eva’s voice is so powerful that she can sing anything. The album is basically a mix of everything we all listen to from classic rock to modern metal.” Eva, who got her start singing along to show tunes and pop music before discovering acts like Evanescence and Breaking Benjamin, agrees. “It’s really a combination of a lot of different influences from all ends of the musical spectrum.” From the syncopated, distortion-drenched groove of the opener “Misery” to the palm-muted riffs and massive hooks of “Blow” (feat. Spencer Charnas of Ice Nine Kills) and explosive anthemics of “Unstoppable,” 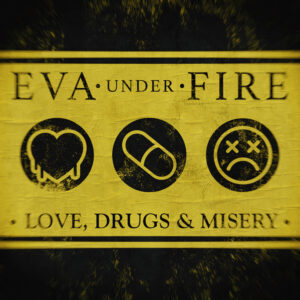 Love, Drugs & Misery has plenty of moments of guitar-driven grandeur. However, that aggression is balanced by gripping ballads such as “The Strong” and “Give Me A Reason,” which are as inspiring as they are impactful. Then there’s “Heroin(e),” an electronica-infused, arena-ready rocker that holds special resonance for Eva. “I wrote that song from a personal space and the music was built around the lyrics,” she explains about the song, which deals with the experience of drug addiction within her family. “I was so grateful that the story could remain intact because it was so powerful, but it was so close to me that I wasn’t sure if it should go on the record or not.” Once the label heard the song they not only embraced it but included it in the upcoming Better Noise film, Sno Babies. That balance of style and substance lies at the core of Eva Under Fire.  For that reason they weren’t scared to try new things on Love, Drugs & Misery, whether that was using Talk Box guitar effects, integrating shredding guitar solos, or putting their stamp on the 1987 U2 hit, “With or Without You.” Simply put, this collection of songs couldn’t have come from anyone else. “There’s a lot of grit in the vocals on this album and that’s because the aggression, anger, and sadness are real,” Eva explains. “In the studio, I was able to tap into those real emotions on demand because I knew that this was important. This is our platform where you need to show how real and true it is—whether you’re having a blast in the moment or you’re on the verge of tears, that’s what you want to convey. I think our producers did a great job of making us feel at home.” “I’m really happy because this album isn’t twelve songs of the exact same style, there’s a variety where you can hear the different influences and that’s important to me,” Chris summarizes. “We wave a flag of humanity and I think this record is encouraging in the sense that whoever listens to this record will find something that will speak to them in its own way,” Eva adds. “We worked so hard to get to where we are today, but we made it. I think this album will really bring a lot of people together and that’s so needed now,” she adds. “I can’t wait to see what that will translate to when we’re finally about to get out there and tour again.”