Panic! At The Disco is calling it quits after nearly 20 years, the pop-punk group’s lead singer, Brendon Urie, announced on Jan. 24.

“Growing up in Vegas I could’ve never imagined where this life would take me. So many places all over the world, and all the friends we’ve made along the way,” Urie wrote in a statement posted on Instagram. “But sometimes a journey must end for a new one to begin.”

Urie said the band “will be no more” after its upcoming European tour, citing the forthcoming birth of his first child as one reason for the band’s breakup.

A post shared by Panic! At The Disco (@panicatthedisco)

“We’ve been trying to keep it to ourselves, though some of you may have heard.. Sarah and I are expecting a baby very soon! The prospect of being a father and getting to watch my wife become a mother is both humbling and exciting. I look forward to this next adventure,” he said.

Urie continued, “That said, I am going to bring this chapter of my life to an end and put my focus and energy on my family, and with that Panic! At The Disco will be no more.”

The singer thanked the band’s fans for their support over the years.

“I’ve sat here trying to come up with the perfect way to say this and I truly can’t put into words how much it has meant to us,” he said. “Whether you’ve been here since the beginning or are just finding us, it has been a pleasure to not only share the stage with so many talented people but also share our time with you.”

Panic! At The Disco’s European tour is scheduled to begin on Feb. 20 in Vienna, Austria, and the last stop will be Manchester, England, on March 10. “I am looking forward to seeing everyone in Europe and the UK for one last run together,” Urie said. 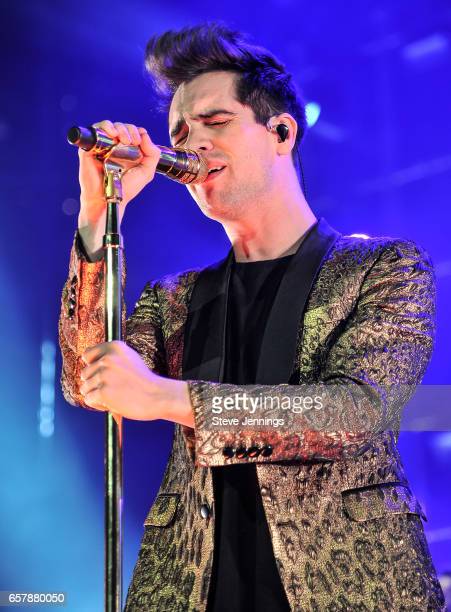 The group formed in 2004 when Urie and the band’s co-founders, Ryan Ross, Spencer Smith and Brent Wilson (who left the group in 2006), were still in high school in Las Vegas, according to Variety. The band took off after the release of its first album, “A Fever You Can’t Sweat Out,” which contained the hit single “I Write Sins Not Tragedies.”

The band’s second album, “Pretty. Odd.,” was released in 2008. Ross announced he would be leaving the band about a year later, leaving Urie and Smith to continue on as a duo playing all of the instruments, Variety reported.

Smith officially left the band in 2015, according to Variety, effectively making Panic! At The Disco a solo project for Urie. Urie released a few more albums as Panic! At The Disco, including the band’s seventh studio album, “Viva Las Vengeance,” last year.

The band performed on the TODAY plaza last August, and in between albums, Urie appeared on Broadway in “Kinky Boots” and collaborated with Taylor Swift on her 2019 hit “ME!”

This article was originally published on TODAY.com

Steve Albini has opened up about his feelings towards Steely Dan. The producer and engineer took to Twitter yesterday (February 6) to share his views

Good news for Linkin Park fans! After nearly six years of not releasing any new music or performing at live events, the band is back

Jason Newsted , the ex-bassist of Metallica (you may have heard of them) is “auditioning guitar players for a heavy project”! Recently. Newsted stopped by Gator 98.7’s Gator

But Not Pop Punk Doja Cat primarily exists in the pop world,  the artist has pushed boundaries over the years, delivering a metal performance at