This weekend we are celebrating the release of the new Three Days Grace CD “Explosions”.  To just start the party, we will be doing a special “Three Days Grace MINI MIX” featuring songs from the past present and future, including a never before heard track from the album called Necrotic as well as the new single “Lifetime”.  Brad from Three Days Grace talked to us about Lifetime and how the song came to be in a Skratch n’ Sniff NEW MUSIC ALERT!

NEW ALBUM, EXPLOSIONS, OUT ON MAY 6th VIA RCA RECORDS 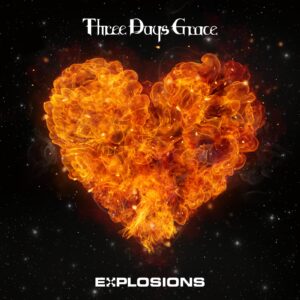 Three Days Grace shared their new music video for “Lifetime” off their forthcoming seventh studio album, EXPLOSIONS (May 6th via RCA Records). The music video was filmed in the town of Mayfield, KY, which was devastated on December 10th, 2021 when an EF4 tornado tore through Western Kentucky. This hit home for the band, as guitarist Barry Stock lives in the area, and band taped the music video for the song in the town to raise awareness and funds to help them rebuild. Three Days Grace has partnered with PLUS1 so that $1 of every ticket sold for their US tour dates will go to support tornado recovery efforts in Mayfield, Kentucky. Proceeds will benefit the Mayfield Tornado Relief Fund and Mayfield Independent School District.

The band shared, “Lifetime is about loss. It also speaks to the human condition to push forward and put one foot in front of the other even when you wake up and your world is turned upside down. Barry lives 2 hours to the north of Mayfield and when the tornado struck he not only knew people directly affected but days later found photos and debris in his own backyard; hitting, in more ways than one, close to home. The Mayfield community has shown hope and resilience in the face of unimaginable devastation. When we discussed how we wanted to visually portray this song the story of Mayfield immediately came up. We travelled down to Kentucky from Toronto in March. To see it all with our own eyes and to meet some of the families while overwhelming at times it was also a reminder to us and hopefully to all of you that while there is suffering there is also hope, resilience and strength around every corner all over the world.”

The band announced their headlining tour of the US and Canada. The multi-platinum selling Canadian band will perform in cities including Boston, Houston, Atlanta, Vancouver, Edmonton & more (full dates below with more to be announced). The band will be joined by special guests Wage War & Zero 9:36 on select U.S. dates and special guests The Warning & The Standstills on select Canadian dates. Tickets for dates and VIP packages are available HERE

Since 2003, the band has staked a spot amongst the hard rock vanguard, breaking records, toppling charts, moving millions of units worldwide In 2015, Human marked the group’s second straight #1 slot on the Billboard Top Hard Rock Albums Chart as well as their fourth consecutive debut in Top 20 of the Top 200. It spawned two #1 singles “Painkiller” and “I Am Machine,” signaling their 13th overall and 5thconsecutive number ones on the U.S. Active Rock Radio chart. Moreover, the four-piece consistently averaged a staggering 3.9 million monthly listeners on Spotify—remaining one of the most listened to rock bands in the world. In 2012, Transit of Venus soared to the Top 5 of the Top 200 and garnered a nod for “Best Rock Album of the Year” at the Juno Awards. The seminal One-X [2006] notched an RIAA triple-platinum certification as Three Days Grace [2003] was minted platinum and Life Starts Now went gold. To date, their veritable arsenal of number one includes “Chalk Outline,” “The High Road,” “Misery Loves My Company,” “World So Cold,” “Good Life,” “Break,” “Never Too Late,” “Animal I Have Become,” “Pain,” “Just Like You,” and “Home.”

7/27 – Wallingford, CT at The Dome at Toyota Presents Oakdale^

8/12 – Irving, TX at The Pavilion at Toyota Music Factory+

11/8 – Vancouver, BC at Queen Elizabeth Theatre*

11/23 – London, ON at Start.ca Performance Stage at Budweiser Gardens*
& with Black Veil Brides, Motionless in White and Ice Nine Kills

% with Godsmack and many more

$with Lilith Czar
* w/ special guests The Warning & The Standstills