The next single from I Prevail’s forthcoming album “True Power” has arrived. Now, I’m a sucker for a hard hitting track, with a little lyrical dysfunction and a whole lot of melody. Bad Things gives me that and a whole lot more. This track is most def on my “Songs to make me question my Lexapro dosage” playlist.

You may have heard the track over the past few weeks on our radio show but have you really dug into the lyrics? If you are the type of person that is acutely aware of your ability to take your thoughts on a dark path, recognise said route and snap into defense mechanism mode than this is the song for you.

I, for one, can’t wait to see them live and bet your ass I will be seeing them the moment they hit the west coast. LMK in the comments if you’re going as well and we can get a whole ass tribe together.

Rising to an arena level and receiving two Grammy nominations — Best Rock Album for TRAUMA, and Best Metal Performance for crushing lead single “Bow Down,” I Prevail proved that they were built to be around for a while. To date, they’ve racked up more than 2.7 billion global streams, are approaching 350 million YouTube views, and saw their “Hurricane” single top Billboard’s Mainstream Rock Airplay chart in 2020: officially the top song on U.S. rock radio at the time. A number of their singles have now been certified Gold and Platinum, and they have been praised by press far and wide, including Forbes, Billboard, The Hollywood Reporter, and NPR. I Prevail further affirm their position among the genre’s elite with their latest album, TRUE POWER. 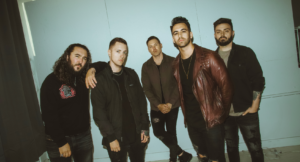 Their single, “Bad Things” comes off of their latest album, TRUE POWER, and showcases them in their most natural setting, live performance. This massively emotional track is different than what the band has released previously, but showcases chilling vocal melodies and hard-hitting and relatable lyrics, with important messages behind them. This also shows off their very diverse catalog and makes us continue to expect something that will defy the rock scene.

I Prevail will  begin the “TRUE POWER”  Tour on September 9th with Pierce The Veil and Fit For a King as support. Yours Truly will appear on the first leg, while Stand Atlantic will appear on the second leg. The first leg kicked off in Asbury Park, New Jersey at the famous Stone Pony Summer Stage on September 9th and will run through October 9th in Chicago. The second leg picks up in Las Vegas on October 22 with an appearance at the When We Were Young Festival. It wraps on November 22 in Detroit in the band’s native Michigan. See dates below and get tickets HERE.