The Legendary California label Suburban Noize Records is celebrating their 25th anniversary with the fans by opening up their vault of rare and unreleased music, which starts off this week with the release of “Let’s Ride” featuring Madchild. The label dug deep to uncover never heard before tracks from the vault and will continue to release deluxe editions into 2023. 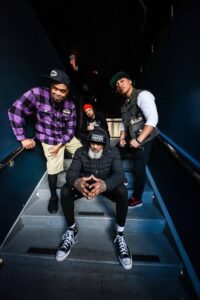 The first deluxe edition will be from G-Punk pioneers (Hed) P.E. who have digitally remastered their now classic album Back 2 Base X and will release it in stores on October 21st via Suburban Noize Records/MVD. Back 2 Base X was released 16 years ago and was (Hed) P.E.’s first official release under the Suburban Noize banner. The album was recorded “old-school” with drums, bass, and guitars being while the band performed live in the studio to harness the raw and organic sound. The album produced many classic (Hed) P.E. joints like “Sophia”, “Peer Pressure”, and “Let’s Ride” which are still staples of the band’s live show today. Back 2 Base X peaked at #12 on the Top Independent Albums chart and cracked the Billboard 200 upon its release. 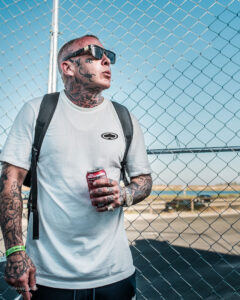 To celebrate the deluxe edition of Back 2 Base X, (Hed) P.E. have released a remix of “Let’s Ride” featuring Madchild online HERE. The track will be one of the unreleased bonus tracks contained on the deluxe edition re-release that will also contain updated artwork, liner notes, and photos from that era.

“I remember that back when we were recording ‘Back 2 Base X’, that everything coming out sounded completely overproduced and polished with Pro Tools to the point where I felt it was sucking the life out of the music,” remembers (Hed) P.E. frontman Jared Gomes. “The album was a direct response to that and the sound was very much inspired by bands like The Clash, The Sex Pistols, Sabbath and Zeppelin. This deluxe edition is really a thank you gift to the fans who made that record what it has become today. There were no radio hits or viral social media songs on this album, but somehow it managed to stand the test of time and has always been a fan favorite.”

(Hed) P.E. will embark on one final headline tour across Europe to end 2022 before they enter the studio to record their new album, and you can get tickets HERE